The Fort Sumter Flag – From Moultrie to Sumter

It’s December, 1860. Major Robert Anderson is commanding a small group stationed at Fort Moultrie in Charleston Harbor, South Carolina.  He is worried that the Southern Confederacy is going to seize Fort Sumter, another fort in the harbor.  He knows that Fort Sumter is stronger than the one he is currently occupying.  He is convinced that if the South takes control of Sumter, all the other forts in the area will be captured as well, so he resolves to move his troops to Fort Sumter while he still can. 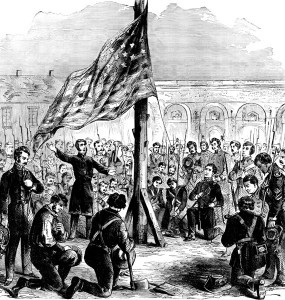 On the night of December 26th, under cover of darkness, Major Anderson evacuates his garrison of sixty to seventy men, along with the women and children, onto three small vessels and gets them safely within the strong granite walls of Fort Sumter.

The next day, December 27th, at noon, the national flag that was carried from Fort Moultrie, is raised upon the flag-staff of Sumter.  Everyone gathers around the staff. Major Anderson kneels  while the Reverend Matthias Harris says  a prayer asking for encouragement, support, and mercy.  Anderson pulls the cord and hoists the Fort Sumter flag to the top of the flag pole as a band plays “Hail Columbia.” Soon the people of Charleston can see the stars and stripes floating above the fort, and they wonder what Robert Anderson will do next.

When Governor Pickens discovers that Major Anderson has moved his garrison to Fort Sumter, he immediately demands Anderson’s withdrawal. This request is politely refused, and Anderson, a native of the slave-labor state of Kentucky, is denounced throughout South Carolina as a “traitor to the South” and treated as a public enemy. 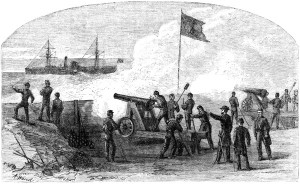 On January 9th, 1861 President Buchanan sends an unarmed steamer, The Star of the West, to Fort Sumter in an attempt to replenish the garrison with badly needed supplies, food, and men. However, Cadets from The Citadel stationed on nearby Morris Island, fire upon the ship as it enters Charleston Harbor, forcing its return home.  These are considered the first shots fired in the American Civil War.

Governor Pickens sends his Secretary of State and Secretary of War as commissioners to Anderson on the 11th of January and make a formal demand for the surrender of the fort to South Carolinian authorities.  Anderson replies that he would sooner blow-up the fort and garrison than suffer such a humiliation.