The Fort Sumter Flag – From Sumter to New York 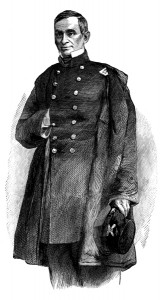 Major Anderson (seen to the left) and his men work at the fort for three months, knowing that their provisions are running out and that starvation awaits them if they are unable to obtain supplies. Another attempt to resupply the fort also fails. Behind the fortress wall, the men watch as the military and batteries around Charleston Harbor build up their forces and prepare for action.

On April 11, 1861,  General Beauregard of the Confederate Army,  sends messengers to request, once again, the surrender the fort.  Anderson promptly refuses. He is then notified that shelling will commence the following day.

The bombardment against Fort Sumter by Confederate forces begins on April 12th, 1861, at 4:20 a.m. Mortar from Fort Johnson is heard first; then, the great guns of Morris Island open fire. Anderson waits until 7 a.m. to respond to the attack.  The first shot is sent by Captain Abner Doubleday towards the battery on Morris Island.

For four hours the combat continues. Guns at Fort Sumter are disabled; the barracks are set on fire.  The bombardment  goes on throughout the night as a storm rages, preventing reinforcements in the harbor from getting to the besieged fort. 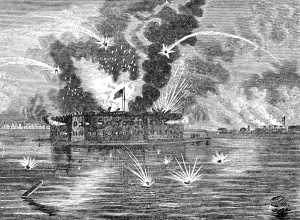 On the morning of the 13th, salted pork is the only food left  for the men to eat, but a fire consumes even those meager reserves.  To prevent an explosion, ninety barrels of gunpower are rolled into the water.

Heat and smoke are stifling in the fort, yet the exhausted soldiers keep the old flag flying.  The insurgents appear to aim their artillery directly at the flagstaff. Eight times the staff is hit without serious injury, but after two days of incessant firing , the flagstaff is finally shot away.  The flag falls to the ground among the burning embers of the fort.

The Confederates take the sudden disappearance of the flag as a sign of surrender.  When  Peter Hart, a trusted friend and advisor to Major Anderson, notices that the Stars and Stripes has fallen, he quickly refastens it to a piece of the staff and places it at the highest part of the remaining ruins of the fort, where it continues to fly defiantly.

A witness of the Battle of Fort Sumter wrote:

Matters had  evidently reached a crisis for the men within the walls of Sumter.  Fearing that some terrible calamity might befall them, and being informed that the United States flag no longer floated over the fort, General Beauregard immediately dispatched three of his aids, with their offers of assistance to Major Anderson, who thanked him for his courtesy, but declined to accept aid.  Before General Beauregard’s aids could get to the fort, the United States flag, which had not been hauled down, as we supposed, but had fallen from the effects of shot, was hoisted anew. 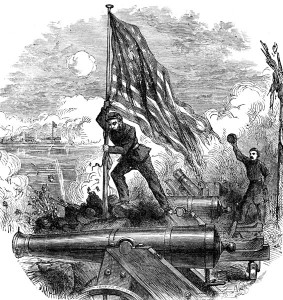 Early in the faternoon of the 13th, ex-Senator Wigfall of Texas arrives at the fort and is met by Captain Foster, and Lieutenents Meade and Davis.

“I wish to see Major Anderson,” says Wigfall. “I am General Wigfall, and come from General Beauregard.  Let us stop this fighting. You are on fire, and your flag is down.  Let us quit.”

“No, sir,” Lieutenant Davis replies.  “Our flag is not down.  Step out here, and you will see it waving over the ramparts.”

Throughout the siege, Anderson refuses multiple requests to surrender.  The Fort Sumter Battle lasts thirty-six hours, with over 3,000 shot and shell hurled upon the fort. It is not until they are out of food and resources that Andersons agrees to evacuate .  The terms of the evacuation are that the garrison will take their individual and company property and march out with their side and other arms, with the honors of war, in their own way and at their own time, and that they should salute the flag and take it with them.

The insurgents agree to these terms, and agree to take Major Anderson and his men to any part of the country, either by land or water.  When the baggage of the garrison is all on board the transport, a portion of the soldiers remain inside, under arms, to serve in saluting the American flag. Sadly, during the fifty gun salute, one man is killed and three more are injured. 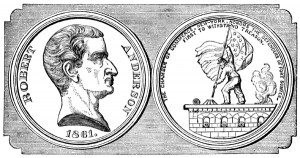 When the last saluting gun is fired, the flag is lowered amid the cheering of the men.  The band plays “Yankee Doodle” and “Hail to the Chief,” as the garrison marches out.   The fortress has been evacuated but not surrendered.  Anderson departs from Fort Sumter aboard the Baltic, which proudly flies the Fort Sumter flag, and sails for the North. When the Baltic enters New York Harbor on the 18th with the flag waving, it is greeted by salutes from the forts and the cheers of thousands of spectators who have gathered to welcome its defenders.  Major Robert Anderson keeps the flag, at the request of Secretary of War Simon Cameron, and places it in the vaults of the Metropolitan Bank in New York City.

Be sure to visit U.S. History Images to see more Fort Sumter Pictures.